Favorite Christmas Toys Over the Last Century: 1910's Part I

Lionel first created the Electric Express train set in 1900 as a storefront display. The idea was that store owners could attract customers and get them to buy electric goods because passer buyers would stop and look at the train. Lionel started selling his trains in New York City and they quickly caught on, but not as he originally intended. Many people that saw the trains in the storefronts, ended up asking the store owners about getting a train set for their children. Lionel quickly shifted his business strategy to fill in the market demand for trains as toys. It took him 15 years and several iterations of different train track sizes to finally get to what most toy trains run on today, the O gauge. He tried to establish his own “standard size” train track, but later realized that the most efficient track size for a train on a loop was the O gauge. By then, he had a couple other major train set competitors in the market who were already using the O gauge size. In order to try to regain the market share he lost during that time, Lionel made his trains larger than his competitors. This was a great marketing ploy as it made his trains appear to have superior value over his competitors’. Another marketing ploy that was hugely successful was making trains a favorite Christmas present. Lionel went from department store to department store asking them to display his trains around their Christmas trees. This was a genius move on his part as we still associate train sets with Christmas today.     1902: Teddy Bear

This timeless stuffed bear toy has been the foundation for many iconic characters like Winnie the Pooh and Teddy Ruxpin. The Teddy Bear has an interesting historical and political connection to its birth story. It was created in 1902 and inspired by national news of the president at the time, Theodore “Teddy” Roosevelt, refusing to shoot a tied-up and defenseless black bear during a hunting trip in Mississippi. Soon after the “drawing of the line in Mississippi” event, a political cartoon appeared in the Washington Post featuring Teddy and a cute tied up bear. 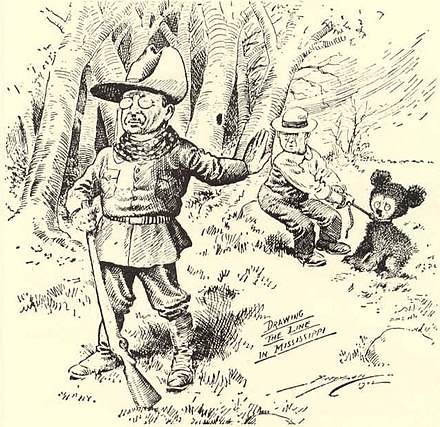 A Brooklyn toy store owner, Morris Michtom, came up with the idea to create a cuddly stuffed fabric bear cub and send it to the president, asking for his permission to call it “Teddy’s Bear.” The president granted Michtom the use of his name in association with the toy, and soon after, Michtom and his wife displayed the first Teddy’s Bear in their storefront window.     1913: Erector Set 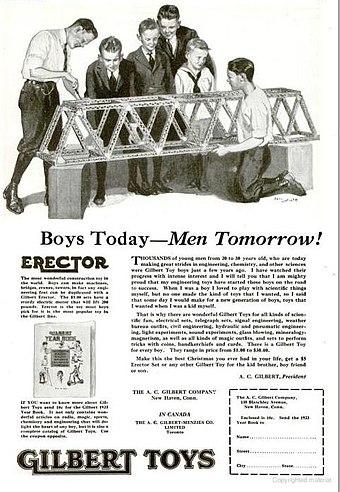 One of the first educational toys was the Erector Set, created by A.C. Gilbert. This toy was geared towards helping boys channel their creative play into making buildings that resembled real life construction efforts. An Erector Set was simple in its design and consisted of several metal 1” square girders and bolts. It later included a motor and other specialized pieces for more intricate designs such as Steam Shovels, Zeppelins, and Ferris Wheels. The educational toy was touted by psychologists, educationalists, and businessmen for preparing young boys for teaching young boys structural principles of building skyscrapers. This was also the first STEM toy as it was geared towards encouraging boys to pursue engineering or other technical careers. Another first hallmark for this toy is that never before had a toy been backed by a clear, nationwide marketing campaign. In 1913, you could find advertisements for the Erector Set in news sources around the United States such as, “Hello, Boys! Make Lots of Toys!” Erector Sets reinvented themselves over the next 50-60 years, but was finally discontinued in the 1980s when sales slowed due to more technologically advanced toys flooding the market.
Back to Outdoor Nativity Sets Blog
Use left/right arrows to navigate the slideshow or swipe left/right if using a mobile device