ALL ITEMS ARE IN STOCK AND SHIP NEXT BUSINESS DAY

1943: Slinky   The Slinky was one of those happy accidents that forever changed history and gave countless children hours of joyful entertainment. Richard James, a mechanical engineer, was working on inventing a new line of sensitive springs in 1943. His goal was to create more flexible springs that could steady fragile equipment during transportation. Richard accidentally knocked one of his new inventions off a shelf and watched as it seemed to step down the shelf gracefully onto some books instead of just falling to the ground. His wife, Betty, jokingly called it a Slinky, because the sound the metal spring would make as it arched and recoiled while “walking,” she felt fit the dictionary description for the word, “sleek and graceful.”   Richard and Betty began selling their Slinky as an 80-foot wire toy with 2-inch spiral coils. However, the toy flopped at first. Their big break into the toy business came a couple years later during the Christmas season of 1945 when James demonstrated his novelty toy to Gimbel's shoppers in Philadelphia. All it took was a few demonstrations and he sold over 400 Slinkys that Christmas season. Decades later and there have been over 250 million Slinkys sold. The little spring turned toy became one of the most iconic symbols of childhood for the past half-century. "A spring, a spring, a marvelous thing! Everyone knows it's Slinky!" 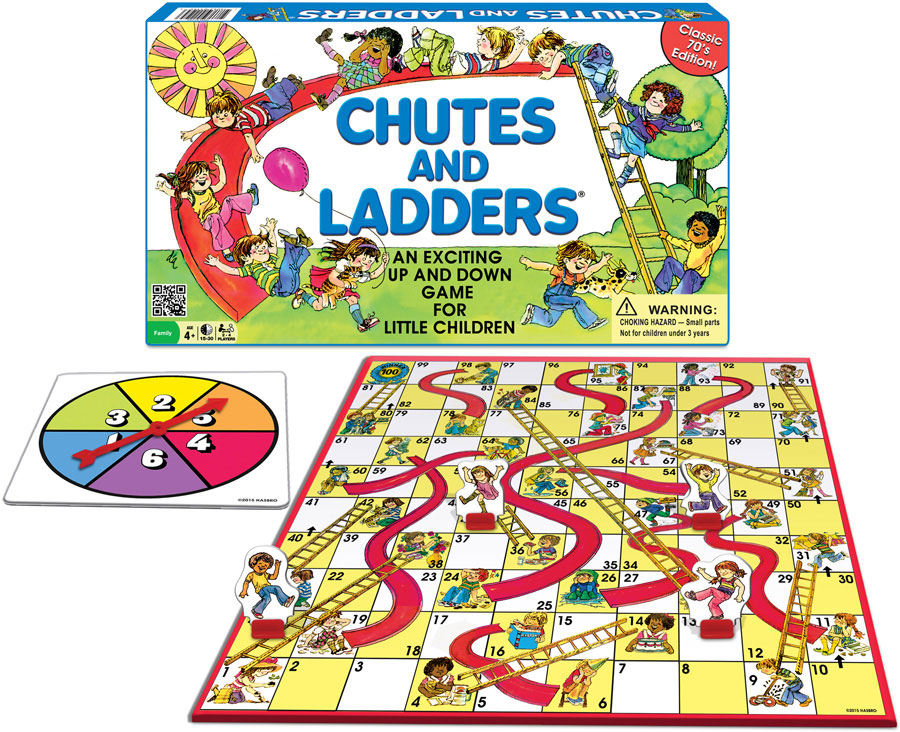 1943: Chutes and Ladders Board Game   Milton Bradley, the famous board game maker released one of their most famous games, Chutes and Ladders, in 1943. The game was a child-friendly remake of a popular British game called Snakes and Ladders. The game originated from India and had a simple goal of trying to be the first to move your pieces from one end of the board to the other without landing on a snake, which would send you back to the beginning of the board. Chutes and Ladders used a playground setting with ascending ladders and descending shoots. The shoots send you back to the beginning instead of snakes. And instead of rolling a die to see how many places you can move your piece, the game includes a child-friendly spinner. The game was easy enough for even preschoolers to play along, making it a perfect option for family game night.   Parents also loved the game because it has embedded morality lessons. For example, at the bottom of the ladder, there are illustrations of children doing good deeds. Leading to the top of the ladder, the children are happily enjoying the rewards of being good. On the other hand, the children at the top of the chutes are depicted as being mischievous. While at the bottom, children are sad because they face the consequences of their bad behavior. Funny lessons, but one that many children have not forgotten over the many years of playing this family favorite board game.

1949: Legos   Legos got it start in Denmark in 1949. A humble carpenter, Ole Kirk Kristiansen, started selling wooden toys and started the LEGO company in 1932. The name “Lego” is a combination of two Danish words, “leg got,” meaning “play well.” After creating over 200 types of wooden toys to sell, Ole saw an opportunity to shift to plastic toys in 1949, with his automatic binding bricks. These bricks have either four or eight interlocking tubes that allow for multiple construction possibilities. He started selling these bricks in a package of four different colors, exclusively to toy sellers in Denmark. This was the predecessor to the Legos we know and love today.   With the little toy bricks sold all over the world today, Lego is now one of the leading toy manufacturers in the world and Legos have won the “Toy of the Century” award, twice. It is estimated that in 2011, there had been billions of Legos produced and enough to count over 52 bricks per person on the entire planet. Legos have partnered with different franchises to make Harry Potter and Star Wars-themed Lego sets. There are also “Legoland” theme parks that exist all over the world, with parks in California, Florida, and of course, Denmark.
Back to Outdoor Nativity Sets Blog
Use left/right arrows to navigate the slideshow or swipe left/right if using a mobile device