Now, some more historical Christmas events that you might want to know about from the 1800s-1900s.

December 25, 1868: President Andrew Johnson Pardons All Confederate Soldiers Before President Johnson left the White House, he gave a final pardon to all Confederate soldiers by signing Proclamation 179 on December 25, 1868. This act of forgiveness and mercy was done in the spirit of Christmas. President Johnson’s pardon was one of the largest blanket pardons ever given by a president as it gave full, unconditional amnesty to anyone who acted in a treasonous way against the United States. This restored all rights, privileges, and immunities to citizens under the Constitution of the United States.

December 25, 1914: WWI Christmas Truce In 1914, across the Western Front of WWI, were Allied trenches (British, French, Belgians) on one side and German trenches on the other. In September that year, Pope Benedict XV’s called for an official truce and was rejected by all parties in the war. However, despite formal orders to carry on, soldiers on both sides were not deterred from putting down their guns and reaching out to their fellow man on the other side of the battlefield. They recognized that they were all stuck in the same situation together, away from home on Christmas. The lines of war disappeared for a short time as both sides came together for an informal Christmas truce. Personal accounts of this event tell of carols echoing through the air instead of bombs and food being shared in good spirits. Soldiers from all backgrounds laughed together as they shared cigars and whiskey. Although soldiers were forced to continue fighting the next day, the amistad was a true Christmas miracle, demonstrating that the best of humanity can arise from the worst of humanity, even if just for a few hours. 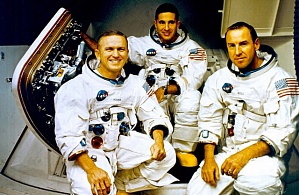 December 24, 1968: Apollo 8’s Christmas Eve Broadcast Three astronauts, Frank Borman, Jim Lovell, and William Anders were the first of mankind to ever leave the earth’s gravitational pull, see the entire earth from space, and orbit the moon. They comprise the famous Apollo 8 crew that gave a Christmas broadcast as they entered the moon’s orbit on Christmas Eve 1968. Their broadcast truly touched the hearts of Americans as viewers saw the first images of moon and Earth from space while the astronauts read passages from Genesis in the Bible. They ended with the now famous line, “We close with good night, good luck, a Merry Christmas, and may God bless all of you, all of you on the good Earth.” This broadcast from Apollo 8 represented a technological Christmas miracle; the culmination of the mystical bridging over to the tangible.   [embed]https://www.youtube.com/watch?v=6vvNxhlP1jA[/embed]
Back to Outdoor Nativity Sets Blog
Use left/right arrows to navigate the slideshow or swipe left/right if using a mobile device